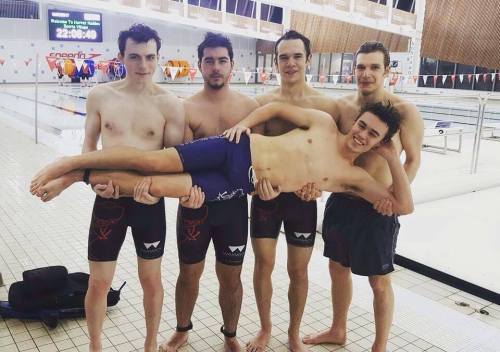 Recently picked for Team GB’s Men’s Under 23 Team, Warwick engineering student Dan Parsloe will be travelling to Hobart, Australia in July to compete at the Underwater Hockey World Championships.

I asked Dan for his thoughts on underwater hockey and what it’s like to train for Team GB.

Congratulations on being selected for Team GB Under 23s team for the Underwater Hockey World Championships! For those who don’t know, how exactly does underwater hockey work?

Excellent question. It’s similar to normal hockey but played at the bottom of a pool, and you push the puck with a smaller stick.

How did you get into underwater hockey?

I started playing at university. I went to the taster sessions and started playing. I hadn’t heard of the sport before I came, but I discovered it at the sports fair in my first year and I’ve fallen in love with the sport.

What is it you love about the sport?

It’s very intense and challenging, but it also gives you a sense of freedom, being underwater. I think that it’s very tiring but rewarding, and it’s completely different from any other sport that I’ve played.

What’s it like being part of a sport that’s a little more unusual?

It’s the same as any other sport, I think. I’m still training to be as good as I can be, pushing myself to my limits. You certainly get more interesting reactions when you tell people about it, but the sport itself feels the same.

It’s certainly been very challenging! They expect you to be fitter and to train a lot harder than I’ve ever personally experienced, as I’ve never been pushed to perform at this level before. But I’m really enjoying it, and it’s exactly what I want to be doing. It’s very difficult, but I love it.

What would you say to anyone who’s interested in trying out underwater hockey?

You should definitely try it out! If I can get to the level I’m at, having only started at university, anyone can. You can go a long way with underwater hockey because it’s so rewarding and unique. If you’re interested in playing and haven’t done it before, do some research and see if there are any local clubs near you, and definitely, find out if there’s a club at your university. If you like swimming, it’s the perfect sport for you.