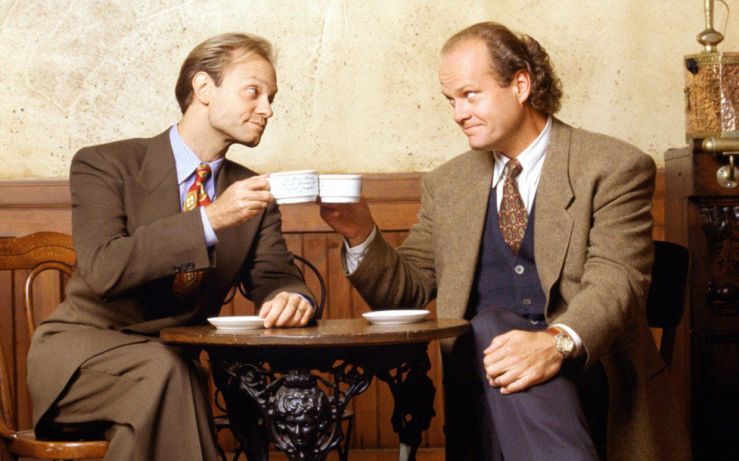 Upon first glance, Frasier is the kind of show that millennials ought to hate.

The Cheers spinoff stars Kelsey Grammer as radio psychiatrist Dr. Frasier Crane, a pompous and self-absorbed snob whose upper-class lifestyle is well out of reach to the average young adult. Beyond the presence of an adorable Jack Russell named Eddie, it’s initially hard to see what the show could offer millennials twenty-five years after it first aired.

Yet when you look closer, Frasier has a number of qualities that resonate with young adult audiences. The show’s whole premise hinges on what it’s like to be an adult living with a parent, a situation that many millennials can empathise with. A significant number of millennials leave home and then return, often as a way of avoiding debt in an increasingly competitive job market.

With this return comes the renewal of old family dynamics, with frequently negative and restrictive consequences. Although it approaches the issue from a different angle, Frasier understands the difficulties of being thrown back into cohabitation with your parents after years of relative independence.

Moving in with his father Martin, a retired police officer whose hip injury means he can no longer live alone, puts serious limitations on Frasier’s lifestyle and sense of freedom. He reluctantly welcomes Martin, his battered recliner, and his dog into his sophisticated world despite their rocky relationship. The move is an act of guilt and convenience rather than love alone.

Likewise, Martin finds his new dependency on Frasier humiliating; “I had plans too, you know,” he tells Frasier in the pilot, ones that clearly didn’t involve relying on his son for physical aid.

For the young adults who relinquish the independence of life at university for familial support, Frasier and Martin’s struggle to adjust to this new situation is all too familiar.

Whether or not they still live with their parents, economic uncertainty is a universal experience for all but the most privileged millennials. Despite the obvious wealth of Frasier and his brother Niles, they both experience financial precarity at certain moments in the series.

Frasier loses his job at the radio station for a period in season six, and his stint of unemployment coincides with his brother’s messy divorce. Drained dry by his ex-wife’s lawyers, Niles moves out of his lavish apartment to a dingy flat in the Shangri-La complex.

While the Crane brothers are hardly impoverished, the show explores how living without financial security can damage your self-worth. A whole episode is dedicated to Frasier’s grief at his sudden unemployment, and whilst giving up his apartment Niles admits that the building was meant to signify that he could succeed alone without his millionaire ex-wife.

The impact of money on self-image, as well as the ability to provide for yourself, are not prominent enough within discussions of millennials among the commentariat.

Although Frasier is richer than most millennials could ever dream of becoming, the show understands the profound link between financial woes and unhappiness far more than stream of opinion pieces about millennials from Gen-X journalists.

In its own way, Frasier is also a show about the non-traditional families that millennials are now forming. Unlike Martin, whose marriage only ended when his wife died, Frasier and Niles have been unable to replicate the nuclear family they were brought up in. Frasier has been divorced multiple times, as Niles by the end of the series.

As shown by Frasier, millennials aren’t the first generation to deviate from this model of family life, but an increasing number of them are waiting to settle down or are rejecting the idea altogether.

Characters like Frasier and his producer Roz, who don’t end up happily married off by the end of the series, are a reminder than fulfilment doesn’t have to come in the form of a wedding.

Frasier consistently lost its ratings war with Friends, the titanic 90s sitcom that is a clear favourite with millennials. But Roz’s pregnancy in the show’s fifth season bears comparison to that of Rachel Green, and Frasier’s portrayal of life as a single parent may have aged better than its illustrious rival.

The divisive ending to Friends (spoiler alert) sees Rachel choose Ross over a promising new career in Paris. In recent years, there’s been considerable criticism of their relationship and of Ross’s character in general, particularly from millennial women.

In contrast, Frasier’s pregnancy plot has a much more modern conclusion. Rick, the father of Roz’s baby, is coincidentally also about to move to the French capital when he learns of Roz’s baby.

When he suggests staying in Seattle to marry Roz, she shuts him down instantly and never feels as though she needs a man to support her and the baby. By the end of the series, Roz’s career has reached new heights and it’s never suggested that she would give this up for a man.

This message, rather than the somewhat problematic one suggested by Rachel’s sacrifice, is perhaps more aligned with millennial tastes than the Friends finale ever was.

The enduring quality of Frasier cannot be explained by its strange parallels with millennial life alone; much is owed to the ageless appeal of farce and screwball comedy, as well as its witty dialogue and genuine emotional core. Frasier didn’t become the most successful comedy series at the Emmy awards for no reason, after all.

Like the father-son relationship that anchors the show, an unexpected connection might be found between Frasier and millennials. Twenty-five years on from its first episode, Frasier deserves to find a place in the hearts of young adult audiences. Strange fellows they may be, but one thing is clear: Frasier has far more to offer millennials than just a cute dog.