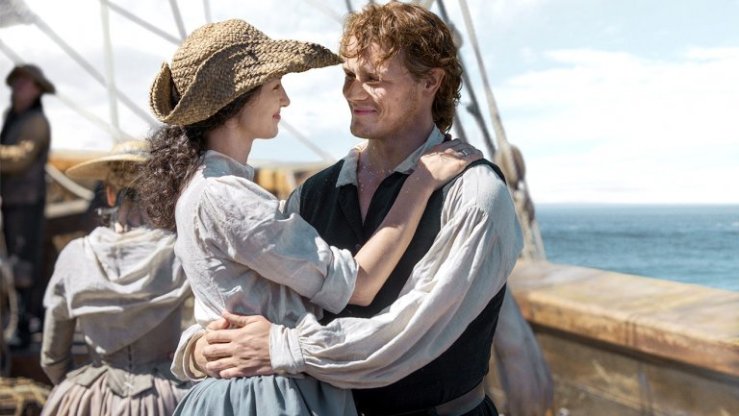 Claire and Jamie face superstitions and secret marriages in this week’s instalment of Outlander.

After last week’s nephew-napping, Jamie and Claire attempt to track down Young Ian. Jamie has conveniently forgotten to tell Jenny and Ian what’s happened to their son, solidifying his status as the world’s worst uncle.

The couple discover that Young Ian was kidnapped by a Portuguese vessel that’s headed for Jamaica, and he’s at risk of being sold into slavery. The Frasers board The Artemis a ship headed for the West Indies, alongside Fergus, Yi Tien Cho, and a few of Jamie’s old smuggling friends.

Claire learns a little about Scottish sailing customs, including the fact that her gender and Jamie’s red hair mark them out as unlucky. Just as they begin to set sail, Fergus reveals to his quasi-adoptive parents that he’s married Marsali, Jamie’s step-daughter. Unsurprisingly, Jamie’s not a fan of this development.

After failing to talk them out of the union, Jamie splits the newly-weds up so they can’t consummate their union.

Claire now has to bunk with Marsali, who clearly resents Claire for usurping Laoghaire’s position in her step-father’s life. What a happy voyage the family will have.

Claire stitches up a sailor after an accident, and surprisingly she’s met by no resistance from the men. The incident does, however, prompt the superstitious crew to speculate whether or not someone aboard The Artemis forgot to touch the ship’s lucky horseshoe as they passed by.

Having impressed him with her Shakespearean knowledge, Claire finds herself at the dining table of Captain Raines. Raines reminds Claire that however illogical she may find the crew’s superstitions, they let the sailors believe they control their own destinies.

As the weeks elapse, tensions on The Artemis begin to rise. After losing the wind and the water going bad, the ship’s crew become more and more concerned that someone aboard is bringing them bad luck. Before too long, the sailors identify Hayes, a friend of Jamie’s, as the “Jonah” that they must be rid of.

Hayes, not content to be thrown into the sea, drinks himself into a stupor and climbs the ship’s rigging. Between the alcohol, the altitude, and the angry mob below, Hayes decides he’d rather commit suicide than become the victim of a mob.

Jamie climbs up to Hayes to talk him down, barely catching him when he slips and falls from the ship’s mast. With the crew still baying for blood, Yi Tien Cho quickly concocts a story to distract the sailors.

Whilst the men listen intently, he tells them how he rejected the offer of an empress who would have given him a position in her household, but with the caveat that he was castrated. His lamentations culminate in Yi Tien Cho hurling his newly scribed life story into the sea, which coincides with a resurgence in the wind.

Yi Tien Cho later admits to Claire and Jamie that he knew the rain would return, based on how low a bird was flying. All in all, the scene is pretty damn weird.

An unfortunate issue with many period dramas that are primarily focused on white people is that they fail to do justice to characters of colour. With the series headed to Jamaica, representation is about to become a primary issue for the show.

Yi Tien Cho is a welcome addition to Outlander, as is actor Gary Young, but there’s still a lot to be done going forward. His associations with mysticism and acupuncture are somewhat stereotypical, although it’s arguable that through his tale of castration and conflict, Yi Tien Cho manipulates Orientalist narratives of exoticism and spirituality.

In The Doldrums, the focus on Yi Tien Cho’s storytelling works as part of an overall focus on superstition and belief. Yet given the relatively limited screen-time of Joe Abernathy, the show’s only other character of colour so far, more nuance is needed in coming episodes. Hopefully, the themes of this week won’t eclipse his entire character and reduce him to a stereotype.

With the ship back on course, Jamie and Claire grab a chance for a quickie and maintain their romance despite last week’s Laoghaire revelation. Although Claire insists that she’s not sure she belongs with Jamie anymore, the couple spend a lot of time staring up at the moon together or talking about how dreamy they both are.

If The Doldrums preaches anything, it’s that strength of belief, be it in love or in bad omens, has an intense hold over people.

Storytellers like Yi Tien Cho who have the ability to manipulate this belief are very powerful indeed. Sadly, the pretence that Claire and Jamie’s relationship is under threat lacks this same power.

Thank god, then, that the arrival of British naval vessel The Porpoise promises some more compelling drama. Acting Captain Leonard boards The Artemis and requests Claire’s surgical skills, as the crew of the British man-of-war have been infected with typhoid.

Having been vaccinated, Claire isn’t afraid of heading over to the other ship, but it’s not disease she should be worrying about. As soon as she prescribes her treatment to the men, Captain Leonard orders the ship should sail for Jamaica. Claire is effectively held hostage and is once again separated from Jamie.

For Outlander, the dynamic of Claire and Jamie versus the world is a successful one. With Claire now abducted like Young Ian was last week, the series moves into classic Outlander territory even whilst introducing an entirely new setting in Jamaica.

Personally, I can’t wait for Jamie and Claire to be facing new challenges in the Caribbean. Hopefully, their relationship dramas will play an increasingly small role, and the showrunners will pay heed to Yi Tien Cho’s words about the power of storytelling.