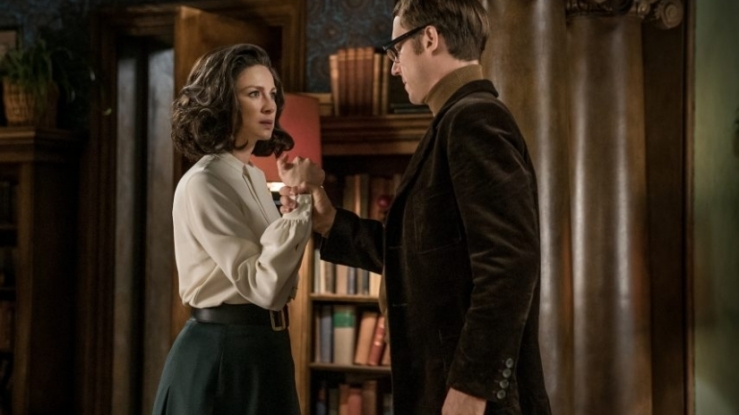 In All Debts Paid, the cost of the bargains that Claire and Jamie have struck begin to materialise, with wider ramifications than perhaps either of them realise.

First, let’s focus on Claire, who’s learning to deal with the disintegration of her marriage. Claire and Frank adjust to their newly open relationship, now that all hope of reconciliation is lost. Frank is discreetly dating around, but Claire is still too wrapped up in Jamie to ever consider someone new.

We see Claire’s discomfort at the arrangement, even as she suppresses her natural reaction. It’s an irrational reaction, but she’s smart enough to know it and pragmatic enough to accept the new bargain.

The gloves are off, however, when Claire’s graduation goes awry. At a celebration for family and friends, Frank’s new girlfriend Sandy (not Candy) accidentally arrives early and embarrasses Claire.

The newly qualified doctor confronts her husband, who admits there was some malice in the action. Yet, it’s difficult to be truly mad at Frank- this is undoubtedly a moment of weakness for him, but Outlander resists making Frank a clear-cut villain.

He’s not characterised as a bad man, but instead as someone whose life has gone awry and isn’t wholly perfect.

Frank and Claire contemplate a divorce, but Frank can’t bear the thought of being separated from Brianna, and doesn’t trust Claire to allow him access to Brianna. Instead, both parties carry on in a miserable compromise.

It’s only once Brianna has graduated from high school that the floodgates open for Frank. Now Brianna is an adult, he wants to divorce Claire and make an honest woman of Sandy, a woman who can truly love him in a way that Claire can’t.

The request is not altogether unreasonable, but Frank has also been offered a position at Cambridge and wants to take his daughter with him to England. He believes she’ll say yes, because Claire has been so distant and absorbed in her work.

This brings me to my first major qualm with this episode. Although the scenes between Caitriona Balfe and Tobias Menzies are compelling, and the relationship between Frank and Claire is fascinating, Outlander hasn’t spent enough time establishing Claire’s life outside of her marriage.

All Debts Paid doesn’t invest the time in portraying Claire’s life as a doctor, and so the rift between her and Brianna isn’t as convincing. Given that this relationship is crucial to the direction of the series, it’s unnerving that so little screen time is given to this mother-daughter dynamic. Hopefully next week’s episode will do right by this crucial relationship.

For now, the series focuses on saying farewell to one of its principal characters. Frank’s death in a car accident foils his chances of happiness back in England, and cements the melancholic position he holds within the show.

A flawed but ultimately good man, there’s something very tragic about how badly wrong Frank’s personal life went after Claire’s disappearance. Claire’s goodbye to her estranged husband recognises the important role he will always play to her as her first love. Tobias Menzies brought a great complexity to the role, and I for one will miss his stellar performances.

As one door closes, another one opens; with the departure of series regular Frank comes the arrival of a compelling new character, Lord John Grey.

Back in the 18th century, Jamie is imprisoned at Ardsmuir with his fellow Jacobites and deemed a particularly dangerous traitor who must remain shackled. Despite this, he’s become an unofficial leader of the men in prison disputes and earned yet another nickname, Mac Dubh. Lord John is the new governor at the prison, and also an old acquaintance; he’s the teenager who Jamie and Claire conned back in season two.

Grey seemed like a good kid back in the rebellion, defending Claire’s honour above his country and his life (albeit unnecessarily). Now he’s all grown up, he’s no less honourable; one of his first actions is to alleviate the prison’s rat problem, which for a jailer is about as nice as it gets.

Grey asks Jamie (who doesn’t recognise the governor) to translate the words of a Scottish prisoner named Duncan, who was found wandering the moors and babbling in Gaelic and French. Jamie agrees in exchange for medicine and blankets for Murtagh- who’s still alive by the way! Nice!

Duncan rambles about cursed gold, but also reveals information about a “white witch who seeks a brave man, a MacKenzie.” No prizes for guessing who this refers to.

Jamie and Grey dine together, and negotiate an opportunity for the prisoners to hunt and collect watercress to prevent scurvy. A man escapes the hunt to provide Jamie with a chance to conceal himself on the moor.

Whilst searching for Jamie, Grey is ambushed by the man himself and confronts him about his true identity. Jamie reminds Grey of his promise to kill him, and willingly presents himself for execution, but Grey refuses.

Over time, Jamie and Grey develop a fairly positive relationship, about as close to friendship as a prisoner and jailer can have. Over a game of chess, they exchange stories of lost loved ones; Jamie speaks of Claire, in a beautiful performance by Sam Heughan, and Grey reveals he lost a “very dear friend” at Culloden and has never quite recovered.

Jamie reacts poorly to Grey’s moment of intimacy, no doubt reminded of the Redcoat soldier Jack Randall who assaulted him. Nevertheless, Grey takes this as a sign of disgust about his sexuality, and his look of shame is heart-breaking.

Ardsmuir ultimately closes, and every prisoner but Jamie is to be transported to the colonies. As an officer in the rebellion, Jamie lacks the royal approval needed to be taken from Scotland. Instead, Grey takes Jamie to Helwater to serve Lord Dunsany, who openly hates the Scottish. Grey now considers his debt to Jamie repaid.

If the writing in All Debts Paid seems a little clunky, that’s because it is. The two halves of the episode’s story certainly don’t work as well together as last week’s instalment, Surrender. Moreover, the lack of focus on Claire’s relationship with Brianna is beginning to seem strange.

Without wanting to sound like a broken record, once again I feel that it’s performances that are saving Outlander from itself. From leads Balfe and Heughan and supporting cast Menzies and David Berry as Lord John Grey, the actors behind Outlander bring great pathos to the show and are its primary assets.