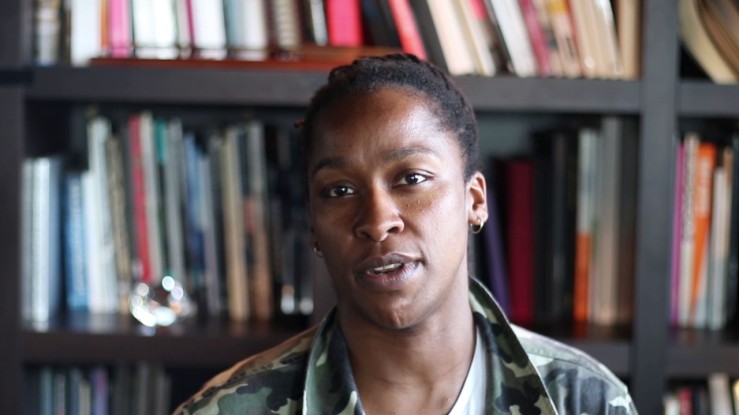 With her deadpan and downbeat take on the world, rising comedy star Twayna Mayne is bringing her debut hour Black Girl to the Edinburgh Festival this August. A former nominee for Leicester Mercury Comedian of the Year, Twayna’s highly anticipated new show discusses race, gender, and being taken into care aged three. We spoke to Twayna about comedy, campaigning, and Coronation Street.

Tell us a little about your show, Black Girl.

My show is about me, so it’s about identity, growing up in London, being adopted. And it’s also very funny! I feel like I should say that.

The content of your show is very personal. Do you find talking about your life and experiences makes it easier to perform or more difficult?

A little bit more difficult. All the stuff that I’ve always done in stand-up is my point of view. It’s very much me saying how I see the world. There are bits of my life in the show, so I’ve been careful about what I talk about because I don’t want it all out there and also it involves other family members indirectly as well.

I think it’s quite helpful, talking about some stuff. But you also have to remember that it’s real life and if you don’t want people to then discuss certain things with you afterwards, don’t put it in. So I haven’t. This is what I’m going to talk about. This is it […] I’m not going to explain any more than I need to.

Are you a nervous performer or does it come naturally to you?

I still do get nervous, but I think I’m a slightly reluctant performer. […] I can take it or leave it, to be honest. For the time being I quite like doing it, but I’m not somebody who’s really enthusiastic about performing in front of people.

Because you were adopted when you were fourteen, and because you’re a black woman in quite a white male industry, your experience is quite different to most of the prominent successful comedians we see on our TV screens. Do you think comedy is slowly becoming more diverse?

Yeah, I think so. I think especially in London if you go to an open-mic night, it’s a lot more diverse. I think the further you travel up, it’s a lot less diverse, but that’s a numbers thing as well. The way that stand-up is, and the way that comedy works, there’s not that many women in it.

There are only going to be so many people who are great, and if you’ve got loads of men, you can just whittle the numbers down. If you’re starting from a small pool of women, I think it’s always going to be quite difficult.

It’s slowly getting there, but I think that comedy’s also an endurance thing and people’s lives change. I think in a way it’s easier for guys to carry on doing it if you want to stop and have children.

There are guys I know who do stand-up and their partners have had children, but they can kind of carry on after a while. After six months they’re coming to do gigs again, but women who are in comedy, if you’ve had a baby, that’s you out for two or three years maybe. It affects men and women differently.

Why did you decide to pursue comedy in the first place?

I was at work, and I was also quite bored. I was looking at an evening course but it was for writing comedy for TV and radio; it wasn’t actually performing. That was oversubscribed, but there was only one spot left on a stand-up comedy course.

So I did that because I thought I was going to be writing, and it couldn’t be that hard. I didn’t quite get the bug, but I thought, “I can kind of do this, this could be a means to an end”. And it was fun, as well, so I thought “I’ll just carry on and see what happens”.

Would you be interested in writing for TV and radio in the future then?Yeah, I’d definitely like to.Who are your heroes, comedic or otherwise?

Comedy wise I remember when I was young watching a lot of French and Saunders, and then Gene Wilder and Buster Keaton. Silent films, I remember watching those ones. More recently I’m not really sure, to be honest. I find watching Coronation Street is actually quite hilarious sometimes.

Sometimes it has some really light moments in it, and it’s really funny and well-written. In terms of comedy every day, or quite a few times a week, I don’t think you can go wrong with Coronation Street.

How do you find the Edinburgh experience? When does the fatigue set in, if at all

Second day! No, it’s not too bad. It’s a long month and you have to pace yourself. Last year was quite a nice year, actually […] I make sure that I have fun and go and see other comedy stuff. The book festival is on as well, so I’m checking out a few things there. I know it’s a month, and most of my annual leave from work, but you have to have fun out of it.

I know this sounds awful, but I try not to hang out with other comedians for long amounts of time. Everyone’s talking about the same thing, and I’d do it too; you talk about your show and yourself. […] Just try not to get into that. Don’t do it.

In the past you’ve been described as a “black female Jack Dee.” How do you feel about that comparison?

I quite liked it, but then the person who said it moaned that I used it as a quote. It got used and then he got a bit upset. I can see the similarities, I can see why he said it, but I don’t know why he then got a bit arsey about it.

It does seem quite unreasonable, to be honest.T

hat’s dudes for you, sometimes.

Recently you took part in the #SHEVOTES campaign to encourage young women to vote. What do you think the role of comedy is in politics?

I’m not sure, really. Maybe just to put a light touch on things. Politics is quite dogmatic, and comedy hopefully isn’t, so it’s just a different point of view to stuff. My approach was just to take the mickey out of it, really. I don’t really like earnest stuff, even though it’s coming from a good place and I did agree with what we were going at, but I think sometimes if the whole thing is to get young people to vote, they’re not into earnest stuff.

This is aimed at like 18-24 year olds. […] You’ve spent your whole life until that point being told what to do, you don’t want someone else telling you what to do. You want to make that decision yourself. Here are some facts, but here’s somebody taking the mickey out of the facts as well.

After your Edinburgh show, what are you planning?

Keep doing gigs, keep writing stuff, and hopefully get some stuff on the radio or TV. Just keep going, really. I think the whole point is to just keep going, you know what I mean? If it’s not awful, carry on, see what happens, see where it leads you. It’s led me here so far, so we’ll just see what happens in the next few years.

Twayna Mayne’s show ‘Black Girl’ is playing at the Pleasance Courtyard at 4:45pm from the 5th to the 27th August (except the 16th). For more information on Twayna Mayne and her comedy visit twaynamayne.co.uk or follow her on Twitter at @twaynamayne.