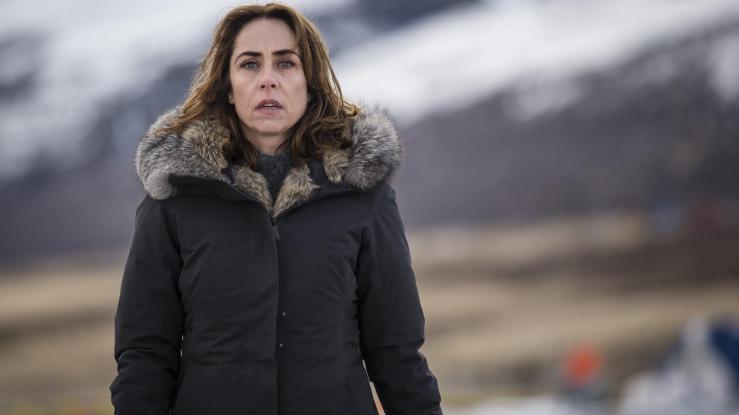 Although previous chapters have felt obscure and frustrating at times, this week’s episode is tightly plotted and anxiety inducing throughout.

Escaped prisoner Tavrani is found dead, surrounded by occult markings. Whilst the town mourns Bianca Munkyo, the man with no face interrupts the wake at The Blue Fox by nailing Tavrani’s tongue to the windowsill. The mysterious figure is shot in the chase that follows, but leads Eric to the location of Bianca’s missing head before disappearing.

Hildur obtains film and documents from Vukobejina about a massacre in 1942, detailing how a sole survivor was reportedly able to regenerate organ tissue. The discovery gives Michael hope for his wife Freya, who’s harbouring Vladik from the police.

Vladik’s bullet wound all but confirms his identity as the man with no face. Despite this, Freya is willing to conceal his whereabouts from Ingrid and ask him to save her from the illness that’s killing her. Though she’s unlikely to see prison if caught, Vladik must be incredibly important to Freya if she’s willing to lie to her daughter.

It’s not just physical wounds that need to be tended to this week. No bodily problem is causing Vincent’s blindness, and Natalie’s trick of throwing the jar of wasps at her estranged partner confirms the psychological nature of the problem. After Natalie admits lying to Vincent about the wasps, their relationship is well and truly on the rocks.

Dan finally comes to terms with Elena’s condition, however mistakenly. The former sheriff threatens Dr. Khatri with a flare gun and breaks into the hospital, before turning off Elena’s life support. Free from Khatri’s influence, Elena is able to escape and is rescued from the cold by Dan.

Erling Munk is revealed to have paid barman Tomak to murder Bianca Munkyo, for reasons that remain unclear. The discovery of her head sends Munk into a panic, and ultimately leads to the violent murder of Tomak by Vladik.

Tomak’s death is a terrifically gory sequence, and is thankfully reminiscent of the most disturbing scenes of season one.

The many story threads that have been painstakingly laid out by the Fortitude writers finally appear to be coming together. The tissue regeneration from Vukobejina must somehow be linked to whatever Dr. Khatri is working on, and Munk’s motive for the murder of Bianca may well be related to the data she gave Michael in Episode 1.

This week’s instalment was the most thematically coherent episode of Fortitude season two so far. In this damaged community, every resident of Fortitude is looking for a way to heal in some sense, to regain a past before the vicious wasp attacks and ritualistic murders of recent months. However, at the season’s midpoint things are far from resolved.