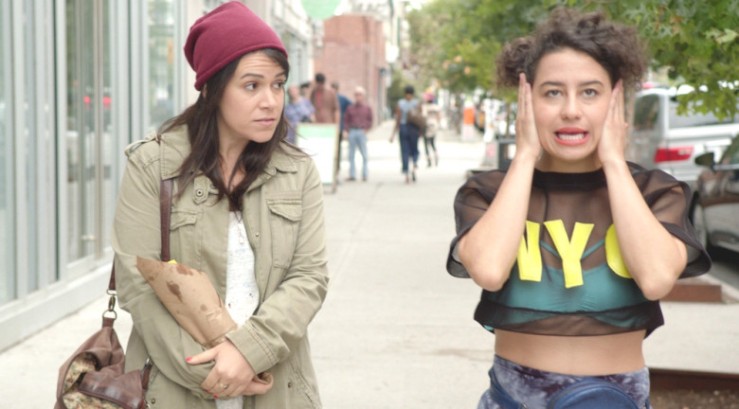 Broad City was universally hailed by critics as the best new sitcom of 2014- a riot of egoism, drug use and nineties hip hop, the first season follows the lives of two twenty-something slackers as they attempt to navigate the surreal yet mundane elements of life in New York.

The show’s writers Abbi Jacobson and Ilana Glazer play fictionalised versions of themselves who are younger, stupider and grosser, but are utterly relatable. Its jubilant and irreverent expression of femininity has given the show a positive status in the feminist community- which is why it was all the more painful to find out that the latest episode ‘In Heat’ was centred on a rape joke.

‘In Heat’ takes place in the middle of a heatwave, and Abbi’s date with love interest Male Stacy (Seth Rogen in an overly hyped cameo) is uncomfortably warm. This doesn’t stop them having bizarre, sweaty sex later that night, but the heat is so much that Male Stacy passes out mid-way.

Abbi is terrified for the rest of the episode that she has raped Male Stacy, and later accidentally kisses a minor in a college dorm room, making her feel even guiltier. Ilana repeatedly points out to her that these are sexual assaults, and she’s right, however unintentional the acts were. But the resolution of the episode was characteristically flippant when it was utterly inappropriate to be so- Ilana waves her fears away, saying “welcome to the club” of sex offenders, and it taints an otherwise excellent episode.

It’s impossible to talk about the ‘incident’ on Broad City without mentioning the Golden Globes. Tina Fey and Amy Poehler (the latter of whom is the executive producer of the show) made their own rape joke about Bill Cosby in their opening monologue to the award-show).

It’s clear that the intent of the gaffe (“I put the pills in the people! The people did not want the pills in them!”) was to make the audience deeply uncomfortable and draw intention to the distressing reality of the Bill Cosby case- that a successful and nationally beloved comedian could have committed numerous sexual assaults over the decades. Whilst the intent of the joke was sound, it was poorly executed by Fey and Poehler, and the impersonations of Cosby just felt like a crass trivialisation of the victims’ experience.

Now I’m not saying that we shouldn’t joke about awful things- humour can be a means of healing pain, and fellow Broad City performer Hannibal Buress proved in the Bill Cosby case that comedy can bring uncomfortable truths to public attention. However, these jokes (and rape jokes in particular) are very difficult to execute without being offensive and triggering.

A famous example of a well-done rape joke is Wanda Sykes’ bit about her detachable vagina, riffing on how absurdly omnipresent the threat of rape is. The joke is on rape culture, not rape victims. This, I think, is what Jacobson and Glazer attempted to do, and ultimately failed at. The intent to point out how easy it is to sexually assault people unintentionally, and to legitimise the experience of male rape victims, was lost in the joke’s poor delivery, just like Fey and Poehler’s monologue.

It seems perverse to talk about other aspects of ‘In Heat’ in light of such an awkward joke back-firing, but the rest of the episode was actually rather good. The opening homage to Snowpiercer on the subway is filled with beautiful elements, from the blink-and-you’ll-miss-them Abbi and Ilana doppelgangers from last season’s ‘Locked Out’ to the elderly confused woman who keeps shouting “Val!”.

Lincoln (Hannibal Buress) and Ilana’s meet-cute in Footlocker (“She wasn’t buying anything, she was just chilling”), the girls’ impressions of Colin Farrell and college RAs, and Bevers (John Gemberling)’s box of kittens were other high points. It’s proof of what a good show Broad City actually is, and only makes how badly the central premise of the episode failed more obvious.

Jacobson and Glazer are talented actors and writers, but they should drop the rape jokes if they can’t do them well. Let’s be honest, without a clever and satirical impulse, then there’s nothing subtle or amusing about them. Broad City is a cleverer, funnier show than that, and should hopefully learn from its mistakes.