2014 was a great year for television, and with such a wealth and variety of shows available to the viewer, it was difficult to decide which series could be considered the best. This is a very subjective list, especially as there are many great shows that I’ve gotten around to watching yet (I’m looking at you, The Good Wife), so I’d love to hear other people’s top ten shows of the year!

Parks and Recreation’s sixth season was consistently funny, proving itself to be one of the most reliable yet sadly under-watched shows of 2014. There have been funnier moments in the show’s history, and it hasn’t reached the heights of episodes like Telethon and The Fight, but Parks and Recreation is a show that you can rely on to be dependably amusing every week (take note, writers of Community).

After six seasons, you can’t not care about the characters- almost everyone that watches the show has a character that they identify with to a borderline unhealthy level (mine’s Leslie). That and the fact that it has probably the best ensemble cast in comedy means that it’s one of my favourite sitcoms of the year, and I’ll be devastated when we leave Pawnee next year.

In The Flesh is a quietly devastating BBC series set in the quiet town of Roarton, following the aftermath of a “partially deceased syndrome” outbreak. This isn’t The Walking Dead– In The Flesh is a subtle exploration of mental illness, sexuality, and religion.

Anchored by a moving central performance by Luke Newberry as Kieren, a gay teenager who committed suicide and is now suffering from discrimination after his resurrection, In The Flesh is one of the best examinations of discrimination against minorities available on television today. The world-building is also fantastic, and I’m keen to encourage any concept driven shows that actually bother to think about the details of their universes. In The Flesh is fighting for a third season, so help it out by giving the show a few more viewers.

The Machiavellian machinations of Frank Underwood got even more compelling in the sophomore season of House Of Cards. Though not well received by all, I felt that the increasingly dark world of Washington D.C. was better explored this season than last, never being afraid to mess with the status quo by killing off major characters and drawing greater performances out of its cast. Robin Wright was given more room to breathe as Frank’s calculating and manipulative wife Claire, and Kevin Spacey remained electrifying as the series’ protagonist.

It’ll never quite live up to its finest opening episode- any show that begins with its central character strangling a dog and monologuing directly to the camera is like catnip to me. But there were moments that came close- the damage done to Freddy Hayes in the wake of Frank’s political maneuvering was unspeakably tragic, all the more so considering the bond between the two men. House of Cards is a Shakespearean tragedy at its heart, and I look forward to seeing the fall of Frank Underwood one day.

To non-Brits, this is probably the least known of the series in this list, but this series caused something of a stir in Britain. Happy Valley was fantastic in many areas- it revitalised a tired crime fiction genre through the excellency of its writing.

Sally Wainwright is a writer for two of my other favourite shows, Scott and Bailey and Last Tango in Halifax, both of which combine an authentic ordinariness of everyday life with more serious plots, but Wainwright excels here most of all due to the level of darkness she was allowed to go to. Sarah Lancashire is fantastic as a single grandmother raising the child of her daughter’s rapist and facing daily violence on a local council estate. All in all, it’s probably one of the most upsetting crime dramas of the year, thanks to its unnerving realism.

Hannibal is a difficult animal to pin down. There have been moments in this season, particularly regarding its use of female characters like Beverly and Alana, which have seemed appallingly unwise. That being said, the majority of the show was fantastic- utterly unique in its visual style and benefiting from the twisted brain of Bryan Fuller. Hannibal turns Bryan Fuller’s usual quirkiness on its head to create beautiful, murderous carnage.

There’s something that’s still taboo about cannibalism, still makes you feel sick in a way that years of gore in television and film has desensitized the public to cannot. Hannibal knows this, and the show’s greatest asset is the way it disturbs you. At times, the mid-season felt unclearly plotted as we seemingly travelled deeper into the savage depths of Will Graham’s poor abused brain, but it was always addictive to watch, and the final episodes of the season were tightly packed with emotionally devastation. I’m hoping that the flaws of the second season- and there are flaws, make no mistake- are corrected in season three, and the brilliance of so many parts of Hannibal are reflected more consistently. 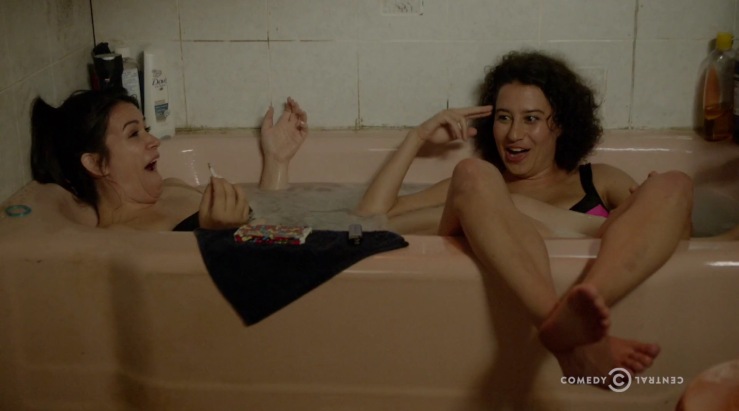 Just as Broad City’s protagonists Abbi and Ilana (sharing names with their real life actresses and writers) can’t see the bizarre and awful elements of their lives, always convinced that they’re about to become “the boss bitches we are in our minds”, Broad City is one of those shows that is so effortlessly amusing that it doesn’t realise how special it is to an outsider. Perhaps it’s because I’m not American and have never been to America, but finding common ground with two New Yorkers in their twenties feels all special- there is endless relatability to even the most dadaistic events of the show.

There have been countless comparisons to Lena Dunham’s show Girls, but honestly? Girls can’t compare to the fantastic series that Jacobson and Glazer have created. Broad City is a joyful exploration of femininity and youth, laced with gleeful self-deprecation rather than shame. It’s irreverent, surreal and addictive. Also, it features Hannibal Buress, comedic god and Bill Cosby caller-outer. Bring on season two in January.

4. Orange Is The New Black

2013 was the year the world fell in love with Netflix, and chief amongst Netflix’s collection of original programming was the stellar Orange Is The New Black. The second season of Jenji Kohan’s surprise hit set in a women’s federal prison expanded, largely successfully, on what made the show enjoyable the first time around. The focus shifted from Piper’s storylines to more of an ensemble feel, a move that is successful- as well as Taylor Schilling plays Piper Chapman, the appeal of the show always stemmed from the variety of lives and experiences she encounters whilst imprisoned.

The supporting cast are outstanding- Uzo Aduba’s performance as Suzanne Warren was the finest of any show on television this year, reaffirming her just Emmy win, and Laverne Cox’s role as Sophia Burset is as revolutionary as it is hilarious . Moreover, real sympathy was created for otherwise comedic characters this season, especially for Morello after the exposure of her imagined relationship with her ‘fiancé’ Christopher. Overall, Orange Is The New Black treads the fine line of dramedy extremely well- now they just need to get rid of Larry. 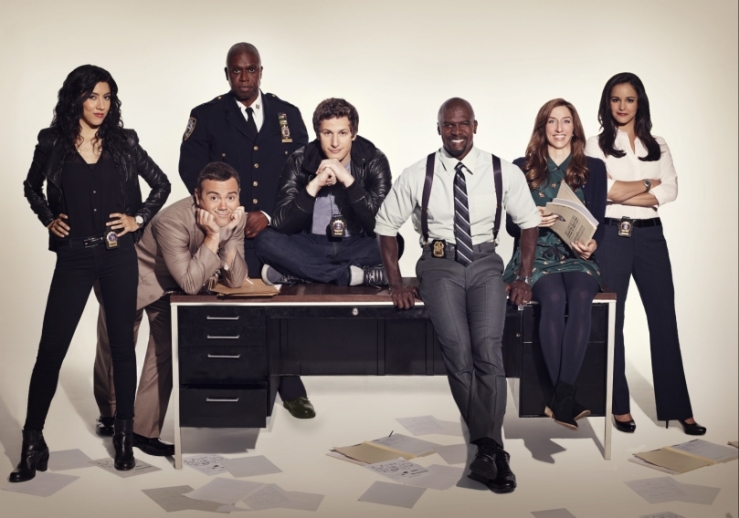 Brooklyn Nine Nine stood out last year as one of the finest new sitcoms on television, from the developers of established sitcom greats The Office and Parks and Recreation. The show benefits from a hugely talented ensemble cast in which every possible character dynamic is amusing, such is the chemistry between the actors. Moreover, Brooklyn Nine Nine is a diverse show- not many shows have four POC in their starring cast.

And in Brooklyn Nine Nine’s second season ,the show has been finessed and streamlined, with better character development (Amy feels like a much more well rounded character than when she started), cast balance (Andre Braugher is the gift that keeps on giving and he’s being utilised much more) and plots (the Boyle/Rosa romantic interest has been dropped in favour of a much more amusing dalliance with Gina). Just as they did before with Parks and Recreation, Michael Schur and Dan Goor have created characters who are the perennial underdogs, and with whom you are deeply attached almost instantly.

Having never seen the original Coen Brothers movie Fargo, I can’t tell you whether the 2014 TV series of the same name stays true to the spirit of the cult classic film. What I can say is that Fargo was a truly rare beast- dark yet moral, anarchic yet ordered, disturbing yet hilarious. As Fargo progressed, the mix of small town quirkiness and extreme violence became all the more intoxicating to watch, as Lester Nygaard goes from snivelling patsy to successful murderer and back again.

Fargo succeeded by never making Lester a likeable character- he’s no antihero that you cheer for from the bleachers; he’s unnervingly slimy, increasingly unhinged, and poisoned by a culture of virulent masculinity. Lester’s reclamation of his manhood through the murder of his wife may make him a less pathetic person at times, but it’s the same toxic behaviour that facilitates his downfall, and he’s just as much of a coward in episode 10 as he is in episode 1. Lester is repellent, and the show never lets you forget it. Throw in the chilling malevolence of Billy Bob Thornton as the anarchic spirit of evil Lorne Malvo, and the discovery of actress Allison Tolman as the show’s heart Molly, and you’ve got a gosh darn fine show on your hands.

Masters of Sex– where do I begin? No show on television today has experienced such an exemplary triad of acting, writing and directing. The strength of Masters of Sex was that it explored intimacy rather than gratuitous sexuality, and the repressive nature of 1950s America is powerfully portrayed on screen by the cast. The Fight was undoubtedly the best episode of television I have seen all year, leaving the viewer completely emotionally rent at the tentative intimacy developing between the shows leads, played to perfection by Michael Sheen and Lizzy Caplan.

It’s not been a perfect season, with the finale episode containing some missteps and the characterisation of Bill occasionally becoming overly sympathetic. But its uneven nature is often part of its appeal; it’s not a show without flaws, but it takes risks that create truly iconic performances by a stunningly talented cast. Masters of Sex is much like its principal characters- often dark and unpalatable, but subtly brilliant at what it does.