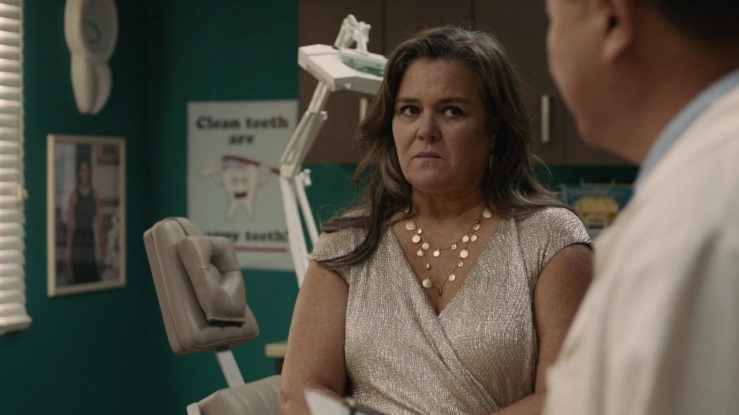 When is a sitcom not a sitcom? When it’s a heartrending triptych of failed ambition. This week’s episode of SMILF, a show that’s only nominally a comedy, sees Bridgette, Tutu, and Rafi come face to face with their own delusions.

Just a few episodes earlier, the news that a new women’s basketball team was forming in Boston helped Bridgette overcome the shock of being sexually assaulted. In Chocolate Pudding & A Cooler of Gatorade, Bridgette finally receives the letter she’s been waiting for and is given the chance to show her skills.

Bridgette’s not the only one following her dreams. Tutu tracks down Edmond, the ex-boyfriend she left for Bridgette’s abusive father and the man she’s been fantasising about for years. Now a dentist and still living in New York, Tutu books an appointment with him to try and rekindle the romance, despite her relationship with Joe.

It’s clear from the beginning that neither woman’s schemes are going to work according to plan. Just to add salt to the wound, however, the episode’s writers Sarah L. Jones and Mel Shimkovitz give you just a little bit of hope before fulfilling this expectation.

Bridgette’s pre-game routine is derailed by an angry housemate and the expectations of her boss Ally, who demands she comes over to the house immediately. Entitled and pathetic in equal measure, Ally went on a plastic surgery blitz whilst her family were out of town and needs Bridgette to change her bandages.

Such are the things we do for beauty- or what we get our hired help to do beauty, at least.

When she finally arrives at the WNBA try-outs, Bridgette learns that the standard of competition is very high. For all her cockiness and high-school experience, it becomes clear that Bridgette just isn’t good enough to make the team. What’s more, all her persistence gets her is a bloody nose and a dressing down from the WNBA recruiter.

Tutu’s fantasy comes closer to fruition than Bridgette’s, as she gets dressed up for Edmond and successfully reignites their former passion. Both Edmond and Tutu are in relationships, but it doesn’t stop them having sex in Edmond’s dentistry chair.

Tutu’s prepared to carry on with the affair before she realises that Edmond had his half of their shared heart tattoo removed. With that revelation, the reality of the affair comes crashing down on her, and her attempts to return to normality with Joe are tinged with guilt.

In the midst of the Bird family’s disappointments, Rafi’s dysfunctional relationship with his mother is the first real opportunity to humanise his character. Whilst not unsympathetic, it’s not until we see how he’s treated by his mother that we really understand what drives him.

Rafi starts the episode on a high, enthused about his positive family dynamic and the opportunity to build IKEA furniture with Nelson. Yet a call from his mother, who wants Rafi to kick out her live-in boyfriend Nick, derails his plans for domesticity.

After driving an hour and a half to her house, Rafi’s mother has made up with Nick and ignores her son. Despairing, Rafi steals one of his mother’s dogs and takes some of its pain medication, leading him to seek out Father Eddie and take confession.

Whilst Rafi’s seeking advice from the priest, Eddie kisses him. There’s no homophobic reaction from Rafi, just the stunned silence of someone who realises they’re being taken advantage of.

A dazed Rafi goes over to Bridgette’s place for some platonic spooning.

Chocolate Pudding and a Cooler of Gatorade is more than just the successful culmination of hints and themes from previous episodes. As well as reinforcing SMILF’s similarity to sadcom stalwarts like Bojack Horseman and Master of None, this week’s episode solidifies the show’s central veneration of the family.

The Conan O’Brien quote that begins the episode, “when all else fails, there’s always delusion,” doesn’t say what you should do once your delusions are exposed as falsehoods. In the eyes of Frankie Shaw, the right thing appears to be returning to the things that really matter, yet it’s hard not to want more for Bridgette and her family. I hope that by the end of SMILF’s first season, the Birds get that chance.

SMILF airs on Sky Atlantic every Wednesday at 10.00pm.