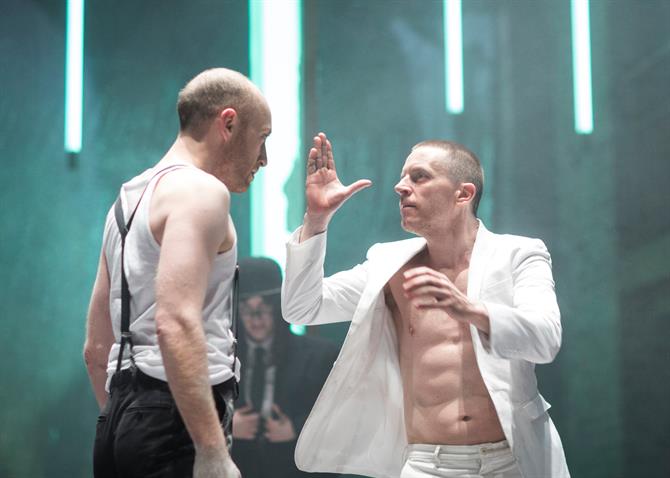 Maria Aberg returns to the RSC to direct a lurid, fantastical production of Christopher Marlowe’s Doctor Faustus. By now, most of us know the story – an ambitious scholar makes a fatal deal with Lucifer’s agent Mephistopheles. In exchange, he receives near limitless power, and meets a tragic demise. Aberg’s play is chaotic to watch, yet rarely steps a foot wrong, and left me near breathless at its close.

The Faustus and Mephistopheles we see in this particular iteration are eerily mirrored images. Oliver Ryan and Sandy Grierson ghost each other’s clothing and mannerisms as they emerge onstage, unaware which role they will take on before they strike their matches. The trick with the matches is much advertised – the actor whose light dies first will play Faustus, while the other will play Mephistopheles. It’s a gimmick, yes, but a damn good one.

In the performance I saw, it was Oliver Ryan who performed as the titular academic. Ryan’s strained, restless portrayal makes the Faustian pact seem convincing – driven to a fever pitch of curiosity, it’s easy to see why this power hungry, highly strung doctor would make such a bargain.

His Faustus is wild of body and of mind, tearing through rice paper walls and hurling books about the stage as if the theatre itself can barely contain him.

Sandy Grierson too redefines the borders of theatrical space with his Mephistopheles, lingering in liminal spaces and melting boundaries into air with his spirit’s transformative presence. He provided an excellent counterbalance to Ryan’s frenetic take on Faustus, pithy and predatory all at once.

The oozing quality to his delivery – coupled with his questionable, Miami Vice sense of style – allows him to menace Faustus with a word. He rarely resorts to overt aggression, save for those brief occasions when Faustus dares to question the totality of damnation.

The performances, though strong, are not the most memorable thing about Aberg’s production. Instead, Naomi Dawson’s set design shines with a sensuality that effectively conveys the highs and lows of Faustus’s existence. The academic scrambles across a paint-splattered pentagram, and has his feet blackened with the ashes of the fires he set to summon Mephistopheles.

The bursts of petals and ritualistic chanting from the ensemble awakened a gluttonous part of me that wanted yet more of this visual and aural stimulation.

Yet much like Faustus, Aberg’s production suffers as a result of its greatest strength. The focus on atmospheric elements means the performance occasionally strays a little too far from Marlowe’s play. This production isn’t textually loyal – the comic subplots have been cut altogether, narrowing the focus and ultimately making Doctor Faustus a leaner, meaner beast. Yet its visual style, stunning though it is, can attract too much attention away from the beauty of Marlowe’s language.

I was therefore relieved that the play’s most famous speech was allowed to speak for itself, when Faustus conjures a spirit resembling Helen of Troy. In this iteration, Mephistopheles rather than a stunned Faustus marvels at the “face that launched a thousand ships”, here represented by the frighteningly young Jade Croot.

A grotesque ballet between Faustus and Helen follows – Faustus whirls her lifeless body around the stage in desperation, a last attempt to achieve some satisfaction from the power he bought with his soul.

Though a little more attention might have been paid to the text, Aberg’s Doctor Faustus is faithful to the play’s spirit. The production is brash, seedy, and visually arresting, in a way that would make Marlowe proud. See it, be moved, and try to escape that lingering thought at the back of your mind that’s asking you if you’d make the same deal.

Doctor Faustus is playing at the Swan Theatre in Stratford until August 4, and the Barbican Theatre in London from September 7. Book tickets here.