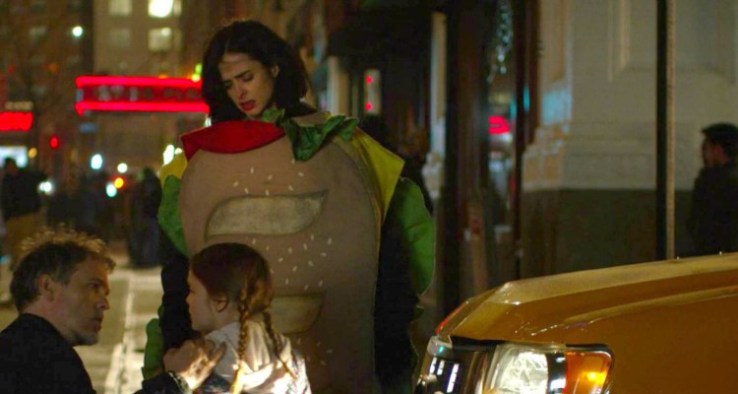 AKA The Sandwich Saved Me has thankfully built on some of the points I brought up last week- the action of this week’s episode felt much tighter and more compelling, centred around the ultimately unsuccessful capture of Kilgrave by Jessica, Trish and Simpson.

Learning more about Malcolm was also a welcome addition- Eka Darville has been quietly captivating in Jessica Jones so far, and is finally being given the opportunity to show more nuance. We now know he wanted to be a social worker, to help people, which clearly aligns him with Jessica rather than Kilgrave. His quiet scene with Jessica when she’s convincing him to go cold turkey is surely the most riveting moment of the episode.

Will Simpson’s new sexual relationship with Trish causes some tension with Jessica, with a delightfully pithy antagonism brewing between the two. He’s the perfect foil to Jessica, whose shady profession belies a moral (if belligerent) temperament.

Simpson’s respectable position as a policeman and former soldier are likewise undercut by the darker areas of his personality. Despite good intentions, he’s willing to torture his enemy’s security in order to get answers and is eager to assassinate Kilgrave (perhaps understandably considering his earlier manipulation).

I don’t believe it’s a coincidence that Simpson bears an uncanny resemblance to Marvel’s very own Steve Rogers- blond hair, broad shoulders, a penchant for brown leather jackets. Simpson likes to play the hero, and who’s more heroic than the Star Spangled Man with a plan? (I’m Team Cap, by the way).

By striking this physical parallel between the two men, Simpson’s grey morality becomes even more stark. He’s Steve Rogers-lite, attempting to inhabit the role of hero right down to his clothes, even whilst he threatens to prise off a man’s knee cap.

So if Simpson isn’t the hero he wants to be, then can Jessica become one? Neither seems to think so. The flashbacks we see in AKA The Sandwich Saved Me offer some insight into where Jessica’s current attitude towards heroism comes from.

Her life 18 months earlier is generally happier but lacks direction, and instead she spends her days swindling corrupt employers and creepy dudes in bars. Her attempts to become the hero Trish believes her to be are tragically cut short by Kilgrave’s abuse, but we’re given no doubt as to the ultimate purity of her motivations- she simply wants to make a difference.

But what exactly does being a hero involve? A costume? Trish’s superhero vision for Jessica involves a lovingly made but garish suit for her to wear, and thinks up the name Jewel, a nice nod to one of Jessica’s aliases and disguises in the comics.

Jessica is typically dismissive of the idea of a costume and of the other guises she’s forced to wear, be it office appropriate clothing or the titular hoagie outfit she wears to work. Jessica the hero wears her own clothing, has no superhero name- she’s simply Jessica Jones.

In this episode, her image becomes both her power and her undoing- by letting him see her face, Jessica distracts Kilgrave long enough for Simpson to deploy the sufentanil. In the end, however, Kilgrave escapes and violates the power of her image- the selfies Jessica agrees to take in order to stop Kilgrave monitoring Malcolm take away some of the weight from her self-assertion. Even though she refuses to let him hear her voice, and does not smile in the images, it’s clear that Kilgrave has achieved a kind of victory over her.

Besides this, two key moments have signalled a darker tone. Trish’s feeling of inadequacy following the attempt to kidnap Kilgrave, and her consequent decision to carry the gun Simpson gave her, are pointing towards bleak things. Furthermore, Hope’s prison beating has been one of the grimmest moments of the series so far.

AKA The Sandwich Saved Me was one of my favourite episodes yet, with a tighter plot and some interesting revelations- roll on episode six, in which I hope someone finally goes to the movies with poor Ruben.